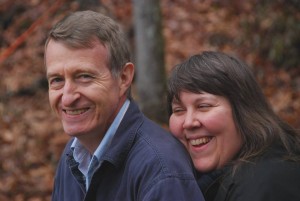 It was worth the wait!
Doug had given up his job to take care of the 2 elderly uncles that had raised him and his brother. While trying to bring in a bit of income while he was living with them (in SC where he had always lived and planned to stay forever), he got the idea of internet marketing and bought some websites and gradually taught himself how to run them. At 51 Doug had never been married or engaged though he had been in a couple of relationships. He was lonely and not involved socially anywhere, so once he got online he found and joined some online          dating sites.

By 43 yrs. of age I had pretty much given up on the idea of marriage being part of God’s plan for me, and I was peaceful with that reality. But my beloved Dad surprised me at one point when he said he had been hearing James Dobson talk about a Christian Dating Site and he thought I should try it. My Dad was not into computers or dating at all, so while I was not interested in dating sites, his thought planted a seed that took root a year or so later after taking a computer job for a friend. Out of curiosity more than anything, I signed up for a couple of the Christian dating sites.